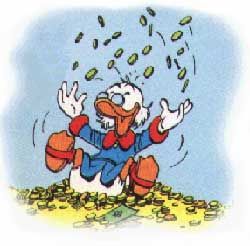 Our financial system is in crisis.

Here's a novel way to rectify it:.

Wouldn't this be nice?

This idea sounds just crazy enough to possibly work, so naturally it won't be given serious consideration. How great is our bureaucracy!!

Of course, it would NOT be tax free.

Repay college loans - what a great boost to new grads

Put away money for college - it'll be there

Save in a bank - create money to loan to entrepreneurs.

Enable Deadbeat Dads to come clean - or else

Remember this is for every adult U S Citizen 18+ including the folks who lost their jobs at Lehman Brothers and every other company that is cutting back. And of course, for those serving in our Armed Forces.

If we're going to re-distribute wealth let's really do it...instead of trickling out a puny $1000.00 ( 'vote buy' ) economic incentive that is being proposed

by one of our candidates for President.