Sorry I'm late getting my blog up. I had a very full day and just ran out of gas before I got it done.

Started out the day early ...up at 5am as I was restless all night. We stayed at a very nice Hotel in Gig Harbor, WA but the pillows were those really puffy kind and I just couldn't get my neck comfortable. Kept me restless all night. To get to Gig Harbor you go across the Tacoma Narrows Bridge. My DH lived in Seattle for years but had never been across the bridge before.. which I found interesting. The bank I used to work for had headquarters in Tacoma and I attended a meeting in Gig Harbor so I had been to the area. The bridge has an interesting history and was nicknamed "Galloping Gerty".. In 1940, the bridge literally broke apart and fell during a windstorm It had only been in service for 4 months and 5 days! This "new" bridge has fared better lol but it carries a pretty steep $6 toll.

We checked out of the hotel around 6:30am and they gave us a snack box "to go" as we were too early for the lobby breakfast. What a nice gesture. It was full of stuff I really didn't want to eat (pastry, juice, mixed fruit cup, granola bar) but was right up DH's alley. We arrived downtown Tacoma about an hour before the race start and they were setting up tents and such. We found a good spot to wait as it was raining lightly. The weather report said it would be dry 7-11am but didn't look like it got the memo. 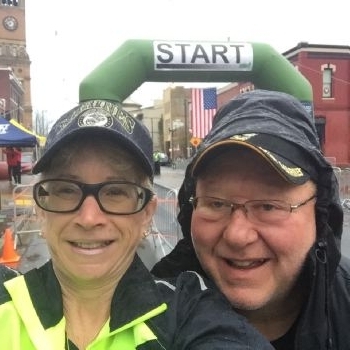 I was surprised how few people were around. I did the Shamrock Half in Portland last year and that attracts about 35,000 people with 6 different races. I actually like the smaller races so it was a nice surprise. The half marathoners lined up and we were off at 8:15am. Boy was the course hilly... much hillier than I expected. I enjoyed the scenery around the waterfront and while it was sprinkling the rain wasn't really a problem. Around mile 3, it actually stopped raining and by mile 6 I took off my jacket as I was getting a little too warm. The course was an out and back route so I always like seeing that midway turnaround. The costumes some of the folks were wearing were just outstanding. 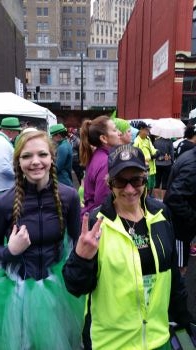 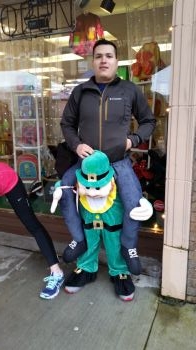 After the turnaround, I was running into the wind... which was cold. My clothes were slightly damp so that was a little chilly... but the wind dried me quickly. The last 1/2 mile was really fun as they had started a kids run and little kids were passing me left and right. They were adorable and it was great to see them get a medal at the finish line.

My DH was waiting for me at the finish line. 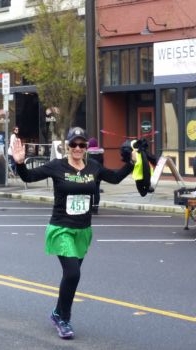 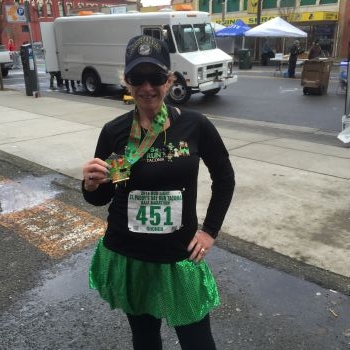 He did the 5k and came in 1st in his division. He is always happy when that happens... there was only one in his division lol...and he got a blue ribbon. His time wasn't bad at just over a 16 min/mile pace considering his foot is still injured. I was at the back of the pack and didn't place... but I did finish with a smile on my face. Since that bout of bursitis in my hip I have been keeping my pace at around a 13 min/mile. I have come to the conclusion that it was speed intervals that triggered the issue rather than the shoes.

After the event, we headed out of Tacoma with a drive to Portland. We made a quick stop for lunch and it was slow going on the freeway because it was an absolute downpour. I guess the weather did get the memo after all because by Noon it was raining hard.

Got to our hotel in Portland and had time for a quick shower before heading into the City. We have season tickets to the Best of Broadway series and tonight's stage show was the Wizard of Oz. 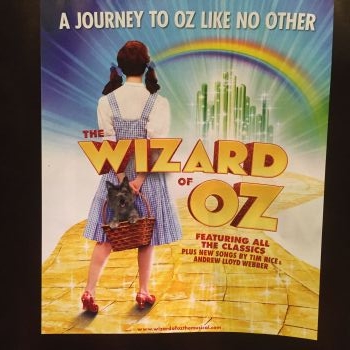 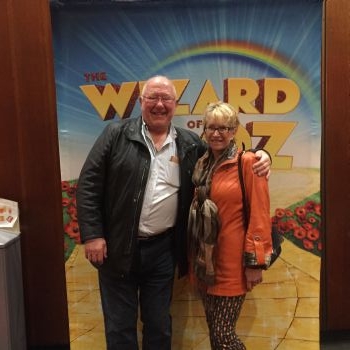 We actually had seen the Wizard of Oz on stage about 20 years ago. Mickey Rooney played the part of the Wizard and Joanne Worley was the Wicked Witch. The show and the special effects were just great. We got back to the hotel around 10:30pm and I just fell into bed. Like I said earlier... it was a full day!