I got mad at Fitbit when my new HR Charge stopped working & they wouldn't replace it. I'd been wearing a Fitbit for 3 years and kept upgrading with each new model. So I ended up trying some other trackers - didn't love any of them & then messed up my foot. Being in a boot for 7 weeks kept me from doing much so I forgot about the trackers. A few weeks ago I started Atkins again and was starting to move a little more (foot still has some tendon damage on the side but I'm getting used to the mild discomfort). Last week I got an email from Fitbit about a new model & decided to buy it.

I've been wearing it for 4 or 5 days now and it still amazes me at how much more I'm moving! Between 9 am and 5 pm it encourages you to get at least 250 steps per hour. Guess, if you're working in an office and sitting, they want you to get some movement. Since it shows up on my app, I'm making sure to get those extra steps in. I'm back to wanting those 10k steps a day - and when I get to 13k like last night I go to bed with a smile on my face.

Stepped on the scale this morning feeling like I'd lost a few pounds. No. I did not. But instead of getting discouraged, I realized that I have been feeling so much better in the past few weeks & that is the important thing. I'm almost 50 - it's a battle to get weight off - but I know it's possible. So, I continue on. And remember that we are worth it. We're worth the battle with temptation. We're worth the sore muscles and the tired bodies. We're worth the effort. Keep on pushing, friends. We've got this!! 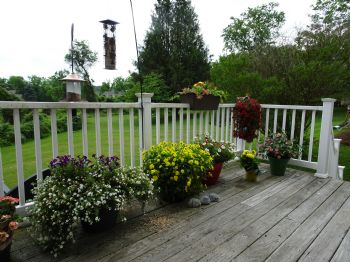