Musings on weight loss, quality of life and regrets.

Last Saturday night we attended a party hosted by one of my husband's Rotary friends and his wife. We have been to their house for many parties over the years and their foods is always the most scrumptious event in town! SO good! As it turns out, we have not seen this couple for several months now as we have all been busy. As usual, their country home was beautiful and the hosted bar, along with the snacks set out presented a very inviting atmosphere. But the thing that immediately struck me, was the appearance of the hostess. She was wearing the same hairstyle she has worn for years, but there was something so very different about her. In the past she has always been friendly enough, but pretty casual and kind of stayed in the background while her husband took care of the party. But this time she looked amazing, was in a fashionable outfit, wearing sandals with heels and nice jewelry and she was out there mixing with people as they arrived. And that is when it hit me. She has lost a lot of weight since the last time I saw her. And she was now a completely different person. It was incredible and actually pretty sobering realizing how much her life had changed for the better since her weight loss. The rest of the evening it was all I could do to not stare at her and watch her every move because the change was SO striking! And frankly, I have continued to think about it ever since then. I have always know that weight gain and/or loss has an impact on people and how they live their life, but I guess I have never observed since a stark contrast before. She literally changed her life by losing weight! And I was just seeing the outward evidence of it! I am sure that her overall health has improved greatly as well. That's pretty incredible and pretty inspiring when you think about it!


And another thought process for me lately. I guess I am spending too much time thinking! :)


I can't remember how much I have mentioned in my blogs, but for the past three years I have been dealing with my boss's failing health. He came down with a viral infection that settled in his lungs and caused complete respiratory failure exactly three years ago in March. And the respiratory failure caused heart damage. I have heard (although he doesn't seem to want to talk about it) that he also has COPD. And all of the above aggravated his Crohn's disease. It hasn't been a pretty picture. He is about 61 years old and has to be on oxygen almost 100% of the time. He is in and out of the hospital and in pain constantly. He went from riding snow mobiles and dirt bikes and fishing all the time, to barely being able to come to work. And as his employee, it has been a very, very tough ride. The extra work because he is gone - that I can deal with easily. In fact, I have become a pro at that. However, the reality of being on oxygen and all sorts of medications is that it changes a person. He has become known as the "grumpy old man" in our office complex because he is always out of sorts about every little thing. I deal daily with mood swings, agitation over every little thing, micro-managing constantly (which is especially hard when I ran the office for almost a year when he first got sick all by myself) and going back and forth between being super religious to the point where it is extremely uncomfortable (even though I am myself religious) and being super down in depression. And then there are the days that he "corrects" me in front of clients... and he is wrong.... so I have to figure out how to deal with it without discrediting him, but making sure the client gets correct information. A super proud male who feels like he is losing it, is not a pretty picture. Oh yeah. The whole situation has worn me down to a point of total frustration with life.


And my point behind this whole back story? He smoked heavily his whole life. And if watching him isn't incentive to never touch a cigarette, I don't know what is. And my connection to weight loss and health? I am sure he knew all along that for the sake of his health he should quit smoking. And he didn't, and now all he can do is wish desperately that he had, back when he could have and still had time to save his health. So what if I do that same thing with weight loss? I know that being overweight is not good for my health. I know that long term it will have a negative impact. Do I want to end up with my health ruined down the line desperately wishing that I had done something when I could have? Sure, losing weight does not in any way guarantee a long healthy life. But it does guarantee not living with regrets. The "if onlys" that can haunt a person later in life.


And so with all these thoughts and musings in my head, I am working hard to lose weight. One pound at a time.

Puppy went to work with me last Friday. I think she had a good time! 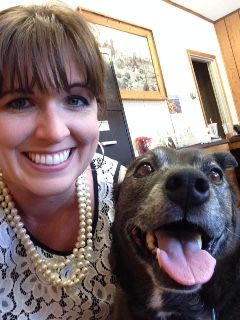