Time For a Page Update

The first time someone told me I was brave was in September of 2011. I had just told my exercise class that I was diagnosed with Post Traumatic Stress Disorder and would be having some difficulty dealing with triggers and just trying to live my life as normally as possible. I thanked them for sticking with me and tried to give them an idea of what to expect so if I did have an attack during class they would understand what was happening and what to do.

After that class one lady came to me with tears in her eyes. Taking hold of my hands, she said, "You are the bravest person I know. Your courage to get through this is so inspiring." One by one they came to me with words of encouragement, hugs, and promises of Prayer.

The following week they handed me an envelope of cash to pay for my therapy. I didn't count it. I gave it to my counselor and told her to let me know when I should start paying. God is good. at my last session 18 months later, she gave me change.

I've been called brave or some synonym of brave many times since.
Synonyms Expand (from Dictionary.com)

1. bold, intrepid, daring, dauntless, heroic. Brave, courageous, valiant, fearless, gallant refer to confident bearing in the face of difficulties or dangers. Brave is the most comprehensive: it is especially used of that confident fortitude or daring that actively faces and endures anything threatening. Courageous implies a higher or nobler kind of bravery, especially as resulting from an inborn quality of mind or spirit that faces or endures perils or difficulties without fear and even with enthusiasm. Valiant implies a correspondence between an inner courageousness and external deeds, particularly of physical strength or endurance. Fearless implies unflinching spirit and coolness in the face of danger. Gallant implies a chivalrous, impetuous, or dashing bravery.

Interestingly, on my birthday in November, someone mentioned to me in passing that I am brave. A few days later, I did one of those silly word tests on facebook and this was my result
"Brave is engraved on my heart" 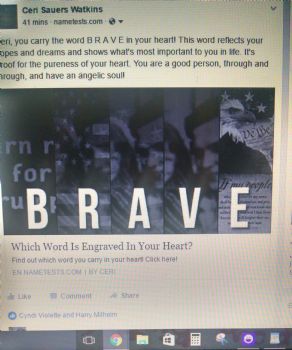 So I've chosen Brave as "My One Word" for 2017. I don't think I'm brave. I think the circumstances in my life have made me strong enough to do what I have to do to survive..... Eventually.

I say eventually because I've often had to overcome obstacles which caused me to experience fear and defeat before finding that strong or brave place within myself to fight through those hindrances. 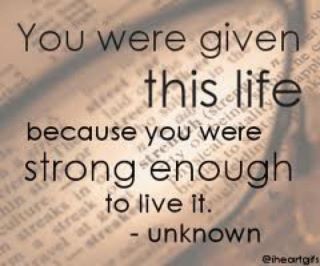 My plan for 2017 is this; Do everything as unto the Lord. I pray daily and ask the Holy Spirit to convict me if I am eating the wrong foods and not exercising enough.