Once I finally got there.

Heidi, (HICIM705), and I chat daily on SP, not only about 5% Challenge business, but about....well just about anything. When we realized there is less than a 3-hour drive between us we decided to plan to meet for lunch.

That decision was made nearly 2 years ago. One thing or another always came up to interfere. Our time finally came this past Monday. It was spur of the moment timing that worked well for both of us.

Monday was a beautiful day. I left my house in plenty of time to allow for construction and heavy traffic. It was an easy drive for me straight off the Interstate. I have made the drive before. When I reached the halfway point, traffic was being re-routed because of an accident. My first thought was a prayer for the injured. My second thought was, "Oh Lord I have no idea which way to go".

Then I had a brilliant idea. Follow the trucks. Great idea! There were trucks in front of me and trucks behind me. Truckers should know the alternate routes right! Unfortunately, because of Stop lights and construction, I ended up following the one truck that was headed the opposite direction I wanted to go. I ended up back at the same spot where I was rerouted before.

I called Heidi, who was gracious and didn't mind waiting an hour for me to get there. (I secretly don't feel bad because I was confused about which way to go. My GPS was more confused than me).

GPS couldn't find me an alternate route so kept taking me on a maze of side streets. Finally, I saw a gentleman and stopped to ask directions. He wasn't much help as he said there really was no other route to get where I was going. He was grateful I stopped him though because he was headed for the Interstate himself.

What to do. I found my way back to where I followed the trucks and drove it again, this time locating the correct exit. Where there is a will there is a way. I finally made it even though an hour or so late.

We recognized each other right away from our pictures. We had a nice walk around the shopping complex where we met. It was sunny but cold so we found a nice restaurant to have lunch. We ate sensibly. The food was great but it was served on rectangular plates. There was really no way we could call those plates 9 inches.

no points for our teams.

You might think since we were meeting in person for the first time it would be hard to carry a conversation. There was never lull. If anything we had so much to talk about our food got cold. It's too bad the LTGL wasn't eating slower. We were there for nearly 4 hours. We had a wonderful server who kept our coffee cups filled with freshly brewed coffee.

We are planning to get together again. (hope it doesn't take 2 years). I know there are Sparkers who have meets, but this was a first for me and Heidi. We talked about planning a picnic meeting at a central location and inviting Sparkers who live within driving distance to join us. That sounds like such fun!

Heidi on the left and me on the right. In case you missed this on the Community feed. 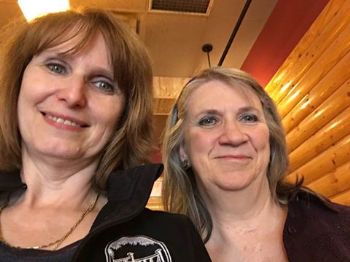