Run Run Rhonda - Bridge of the Gods Half Marathon Recap

This will be the second year that I have participated in this event. The Bridge of the Gods is a bridge across the Columbia River in Cascade Locks, OR that connects Oregon and Washington. The Bridge was featured in the movie "Wild" and is where Cheryl Strayd finished the hike of the Pacific Crest Trail that she started in Mexico.

Cascade Locks is about 3 hours from where we live so DH and I decided to make a camp trip out of it. We have been staying at Viento State Park which borders the River and is only 15 minutes from the Venue. Yesterday, we took a walk to the River and enjoyed watching kayakers; paddle boarders and windsurfers. It gets really windy in this area so it is a popular place for these types of sports. 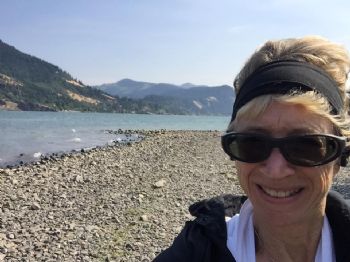 This morning, we were up early to get ourselves fed and prepared. Participants start on the Washington side of the bridge and finish on the Oregon side. There is no parking on the WA side so everyone is shuttled by bus to the start. We decided to get there early as finding parking can be tricky. Parking a mile away from the finish isn't exactly pleasant when you have to walk back to the car after you've run 13 miles; so better to be early. Everything went smoothly and we were even early enough to get in the porta potty line without a long wait. Score! 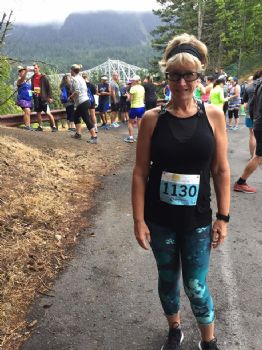 It has been pretty warm all week (upper 70's - low 80's) so it was fortunate that this morning it was cool and even a little drizzly. This is the type of weather I typically run in on the Oregon Coast so felt right at home. We started with the run across the bridge and footing was a bit tricky as the bridge is metal and it was little slick. Once we crossed the bridge we ran on the road for a short stretch then crossed to the Historic Columbia River Highway trail. This a a beautiful paved trail that was originally the major East-West State highway before the freeway (I-84) was built. The trail is very scenic and green through wooded areas and along the River. I did know that there were a lot of hills but I forgot just how many. Flat terrain was the exception and at least 90% of the course was either up hills or down.

The finish festival was well put together. They served a full lunch which was good and plentiful. DH participated in the 5k so he finished first and was waiting for me when I came in. I asked if he had eaten (yes); however he was happy to go through the line with me again (lol). They had some great cookies ... my favorite... white chocolate macadamia..but II have been doing great staying off the sugar so I didn't have any. Again, DH helped out and had another one in my honor.

While we were eating, they started announcing the age division winners and awarding prizes. I didn't place; however DH came in first! He was smiling as he received a nice commemorative Pint Glass. I got his picture up on the podium accepting congratulations from the crowd. What a clown lol 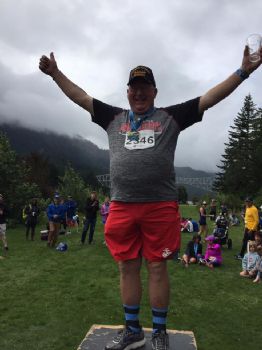 Overall, a nice event and enjoyed the day. This now makes 30 consecutive months where I have run at least one Half Marathon... my streak continues! 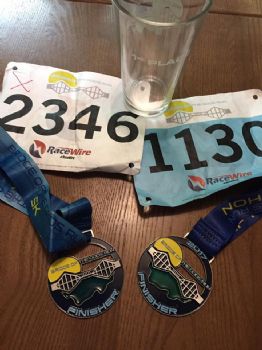