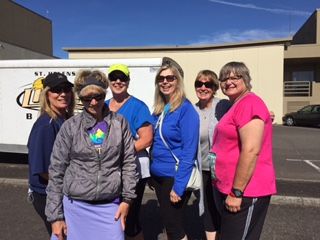 It is way past time for a post about the Portland to Coast Relay event. This is the 2nd year I have participated with the team "The Eight Golden Girls" and like last year, I thoroughly enjoyed the experience. Many of the relay team have 12 participants and two vans. The benefit to a 12 member team is there is a period of time during the event where you can catch a little shut eye. Also, with 12 people each person would only walk 2 "legs". With an eight person team you each walk 3 legs, you are all in one van, and there is no stopping for sleep. 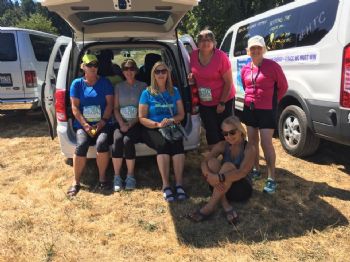 The Portland to Coast Relay is a walking only relay which is done in conjunction with the Hood to Coast event. The walking event starts in Portland and has a total of 24 legs where the Hood to Coast has 36 legs and starts at the summit of Mt. Hood. Our start line is at Leg 13 and we finish with the HTC runners at Leg 36 on the Beach in Seaside. Last year, our team placed third in our division (team average age 60+) so we got a free entry... sort of like being an elite lol. We met at our team leader's house in Seaside at 1:15AM on Friday morning... yes 1:15AM. My DH and I had been to her house Thursday evening to pack some gear and set up our refrigerated cooler. That cooler really was nice and it worked well for our water and snacks that needed refrigeration. After everyone piled in the Van, we left at 1:30am for Portland; a drive of about an hour and a half. Our start time was 3:45am this year vs 5:00am last year. After we finished, the consensus of the group was we liked the 3:45am start better. The parking lots at the exchanges were not nearly as crowded and the porta potties were fresher :-). 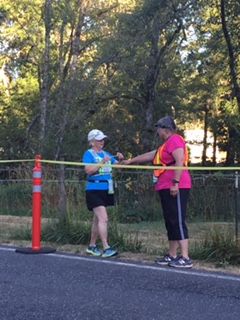 The year, I was the 7th member on our team roster so that meant I was responsible to walk legs 19, 27 and 35. My 3 legs this year were much more difficult that the legs I did last year. The 3 legs totaled 19.34 miles and my total walking time was 4:27:02 which is an average of 13:49 per mile. Leg 19 was rated Hard (lots of hills, but it was on pavement); leg 27 was rated Medium (again on pavement, but did it at night in darkness) and leg 35 was Very Hard (more elevation and mostly on loose gravel). Leg 35 was hardest for me for sure; but it was exciting to pass the baton to our walker who would take it to the finish. 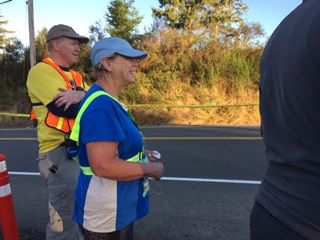 We had some snafus this year that cost us some time. Member 1 had a Fall on loose gravel on her 2nd leg and when she finished she needed to be bandaged. Then Member 6 also took a bad Fall at night on her 2nd leg. Both of these ladies were troopers and did their 3rd leg without complaint. Member 2 took a wrong turn and got off course. After she realized what happened, she turned around and got back on track; but it cost some time. As for myself; no falls this week. I was really cautious and tried to stay as aware as possible as I was still plenty bruised and sore from my bike tumble the week before.

Imagine being in very close quarters with seven other women... all tired and sweaty. What is really beautiful is that we all got along so well and no one was snarky or crabby. We had one person who was new to the team and she was such a pleasure to have. She volunteered several times to drive and help out others who weren't comfortable driving their shift. (We alternate driving duty) She also ran back to help out our team mate when we were advised by another team that we had a walker who had fallen. She was always pleasant and I wish we had one because I would vote her for Miss Congeniality!

The weather this year was really great. Last year, we had a heat wave and it got up into the 90's during the day. This year, it was pretty optimal and didn't get much above mid 70's. It did however get cold at night and I for one wasn't prepared. Next year, I need to remember to bring long warm leggings to wear at night. I did bring a couple of space blankets which really came in handy for our walkers who were waiting outside for the baton pass. I was responsible for the team interval timing so I was also typically outside each time waiting for when the baton was passed.

Our team finished fifth in our division this year... so we were all a bit disappointed by that. The team that came in fourth was only minutes faster so if we had no snafu's we probably would have been fourth. The 1st, 2nd and 3rd place winners were all MUCH faster than us and averaged between 12 and 13 minute miles. We finished in 31 hours 24 minutes 23 seconds (11:09 AM Saturday morning) and our overall team average was 14:30 /mile. Even so, we did finish just over eight minutes faster than last year... so hooray for that!

There has been some talk about a location change next year. I'm really keeping my fingers crossed that doesn't happen as we finish in Seaside on the beach and I live just a mile away. If we finished in another City it would either mean a drive home... or a hotel room which would be time and expense. The event is not real popular with the residents in Seaside as the town in inundated with thousands of people and Vans which congests traffic to a stand still. It does bring a lot of tourists to town, but typically a week-end in August is busy with tourists regardless. So time will tell; but my guess is that a change in venue is going to happen at some point. There was an inaugural "Hood to Coast" relay earlier this Summer in Washington that went from Hood Canal to the Coast in WA. It makes me wonder if that was a test for a possible change; or if the WA location will be a permanent addition to the relay calendar.

Thanks for stopping by and reading my summary. This coming week-end I'll be running the Rock n Roll Half Marathon in Montreal... so I'll try and post the re-cap of that event a bit more timely! 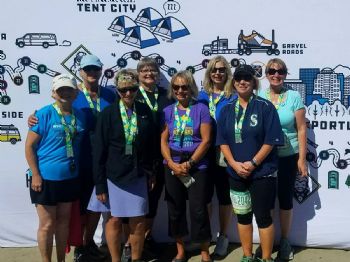 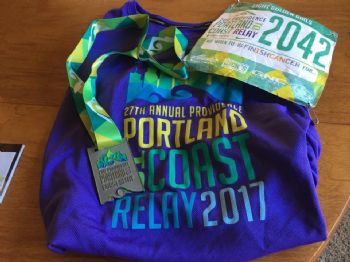