I have really worked on my nutrition since May and am very comfortable with my program. I have been fairly steady with losses. I thought the time had come to work on fitness. Yesterday, I did my first K anything and it was a

. I have been looking so forward to doing this. I was anxious...excited..and also afraid I would be LAST.

Michigan is experiencing a horrid September with heat waves. I hate walking in humid conditions...but really did so this past week so it would help me on Sunday.

The Brooksie Way is in its 10 year and takes place at Oakland University in Rochester Hills. Two friends came from Buffalo, New York to participate as well. (and for you sparkys.....I met Vicki on sparks! This was our second time meeting in person however). We got a hotel for the night before. We hit the Expo for the Event, had dinner out, time in the pool and hot tub...before bedtime.

Sunday am...I felt such a wave of emotions. The Brookie Way consists of the Half Marathon, the 10K and the 5K. Just before they let our wave go out...I almost cried. I felt so PROUD as they played the song...I walked 500 miles!

Vicki couldn't do the 10K after all due a back injury, but she was a TRUE spark friend and rooted us on! I told Cheryl, I could not keep up with her and I didn't want to hold her back...and to GO FORWARD.

She stayed for about 5 minutes....giving advice and she also wanted the majority to get ahead so we all were not clustered. When the first bend in the road hit...she was off!

I felt exhilarated! I could not believe the amount of ppl along the course with cow bells...and even a bag piper! I could do this. I could not stop smiling!

I noticed I was getting rather warm once we hit the woods. The ground was uneven, but I did appreciate the trees and the breeze. As we exited them, a fork in the road emerged. There were two signs....on the left...the 10K and on the right...5K. I noticed that everyone was going to the right..even the 10K color shirts. When I got up there, I asked the volunteer...if I was for sure to veer left. She said yes for many ppl were changing their minds due to the heat and doing a 5K.

I hesitated. Should I? I am use to heat at work...I work in a dry cleaners....no air...steam....and I had TRAINED for this. I SIGNED UP FOR THIS. I wanted that 10K medal. That accomplishment.

I stayed on my course.

Some of the 1/2 marathon runners were now coming my way. I could see them. They looked....HOT...but determined. Some got sick as they reached me. EWWW.....I decided not to glance at them anymore and went on.

I am not sure when I realized...that no one was in front of me anymore. I turned around...and no one was behind me either.

It was 15 minutes later....I stopped and looked around. Still no one. Not even college students walking around. It was EERIE. I was thinking this was like an episode of the Twilight Zone. The world had ended and I was alone. My mind started to wander for if an alien force or a zombie attack would occur...I was wearing out and I could not get away. I almost took a picture of my surroundings.....but thought against wasting time.

At mile marker 4....there was a water station. The group of volunteers were cheering me on. I thanked them. I did. They told me I was the last one..and no one was behind me. I looked back...and saw a police van ...take away the cones I had passed earlier. I started to feel....stupid.

I continued on and could hear them chant my name...encouraging me to go.

Mile maker 5 ....I wanted to cheat. There was a turn around ahead. Instead of going down and then turning around and heading back to make a left...I almost went right instead.. That did occur to me.

From mile 5...is a HILL ...a STEEP HILL before flat land to the finish line. The police picked up the last of the cones and drove on by.

I stopped half way up that hill. I thought about laying down on the side of the road and die. I wondered if anyone would find my body. I drank the last of my water and ....went on.

I finally saw the Finish line.

I stopped and took my only picture. 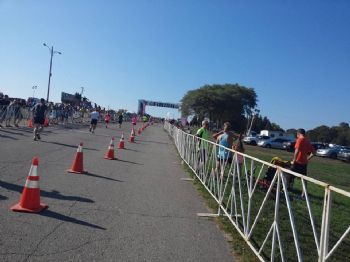 More marathon runners merged with me on my left.


I could now barely walk. I was so hot and the front of my legs were killing me from the hills. I remember thinking..I wished I had a picture of me crossing....but....oh well. I did smile once I hit the mark.

I didn't realize that Vicki was there and took my pic! I will treasure that! Cheryl ran up to me...with congrats and directed me where to go and gave me a bottle of water! I was so touched. 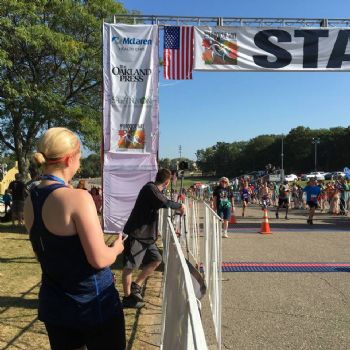 I got my medal!


I cannot tell you the PRIDE I felt.

I felt so ashamed. 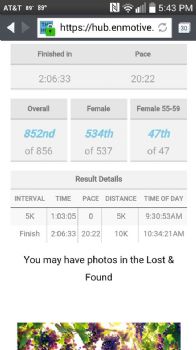 I think....in all honesty..there is still that inner voice inside us that make us human...the voice that still doubts us that we are good enough.

I focused on what I should NOT have.

I saw ppl....in golf carts...and remember thinking I wished I Had a friend with a golf cart! LOL! It was only later......I found out these ppl...did not FINISH and were taken off the course. I am glad I didn't know that then....for ...I did finish.

I never gave up.


I will join and do more

Will I be last?

Well...we KNOW that can sure happen! and may still!

YES! I will Never Give up! 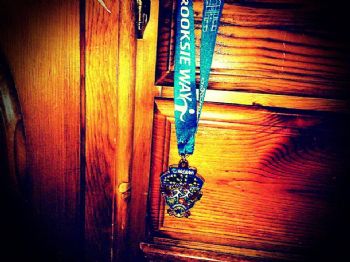 
Disclaimer: Weight loss results will vary from person to person. No individual result should be seen as a typical result of following the SparkPeople program.