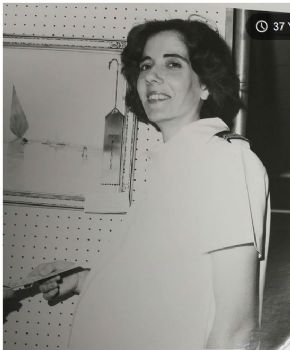 To be completely forthright with those who read this ... I joined the Navy for economic reasons.

It was 1976 and the Pittsburgh area was experiencing a depression because the steel mill industry was collapsing. I was a high school physics teacher. Loathed my job primarily because I do not enjoy working with children. I had never aspired to teach kids. I'm not built for it. I was unable to break into other fields such as computer programming because, let's face it, in 1976, women could not. With a 4.0 QPA, the bigger qualifier for me was being female. So there I was, in front of the dreaded classroom.

The Navy beckoned and I was off to Officer Candidate School in Newport Rhode Island. I had seen enough movies to know that it would be rough, but I had been raised with 5 brothers, played a lot of baseball (not softball), basketball, and thought I was tough. LOL. It took less than 24 hours to be broken.

I was detailed to Washington DC to a database administrator job -- I was happy; I needed a large metropolitan city so my spouse could find a job.

The GI bill at the time was very generous. I applied to a local university for a master's degree in computer science -- the GI bill paid the tuition and the books. If I were not on active duty, they would have paid me a small stipend while I was a student.

The military had just changed its policy on pregnancy. Not so long before my entry, pregnancy got you an automatic discharge. By 1979, it had changed to you could request a discharge if you proved you were pregnant. In 1979, I could have sold my pregnant urine to women wanting to leave the military before their contract was up. I had a lot of offers. The picture shows me in my maternity uniform,

I earned my master's degree 2 weeks before the birth of my second child and resigned my commission several months later.

Because so much history gets lost, here's a link to a 1981 article about the returning Iran hostages; Vietnam vets felt they had been cheated. We had a parade for the hostages, but tried to hide our Vietnam vets. I'm glad that has changed.