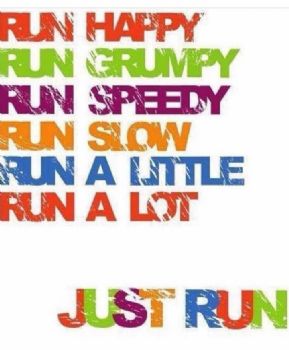 I have been planning for Vegas all year. For 2017, I purchased the Rock n Roll Three Event Tour Pass. I picked 3 events out of the Series and signed up for Seattle, Montreal and Vegas. Registration fees for Vegas are typically higher than most other Cities so using the Tour Pass helped keep registration costs reasonable. As an example, I paid $50 pre-registration for the AZ Rock n Roll in Phoenix. Pre-registration is available for the next year only at the event expo or for a few days afterwards. Vegas pre-registration is $99 and will continue to increase as time goes on. I have thought about getting a Tour Pass again in 2018; but have decided not to go that route this year. Most likely, the only RnR event I will do in 2018 is Arizona and I purchased registration last year at the Expo. 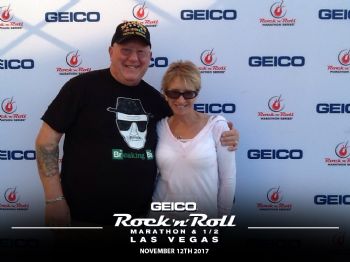 We traveled to Las Vegas almost a week before the run. We left our RV in Arizona (to store for the Winter) so we drove and stayed in a condo for the week. A vacation club we belong to offered a couple of condo options and The Jockey Club had a four out of a five star rating... so we went with that. I'm so glad we did. 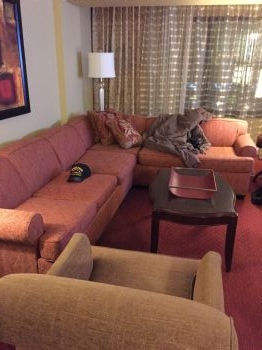 The location was absolutely perfect! It is a smaller property tucked between the two Cosmopolitan towers. When we checked in, there was NO line and the staff were very accommodating. Without asking, we were offered a view room in the Derby Tower since we would be there for the week. The place is a bit dated (it opened in 1974) but was well laid out and very spacious. It was great to see the lights of the Strip and the Bellagio Fountains without the noise. It was an easy walk to the event Start Line and we were also able to walk from the finish line. Our bedroom had a large walk in closet and separate bathroom. The living room comfortably could seat six people as well as the dining area. The kitchen had all the pots, pans and utensils I needed as well as a full size refrigerator. I made all of our meals with the exception of just a couple. That was a real money saver as food and beverages in Vegas are very expensive. DH had one beer while I was running the event and it was $12. 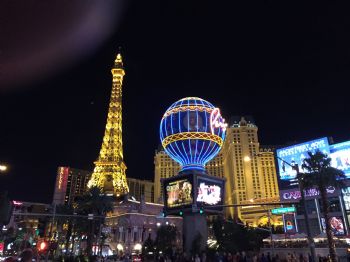 This was the first event I have entered where the start time was later in the day. The event started at 4:30pm (dusk) and my corral started an hour later at 5:30pm. While it was exciting to be in Vegas and run the Strip (with no traffic allowed); it was harder than normal as you aren't starting off"fresh". I tried to relax and just chill in the room most of the day to conserve my energy. I was also a little befuddled with how to handle my meals. For typical events, I get up early, drink coffee and have a bowl of Raisin Bran with a banana and an English Muffin. I like to eat a few hours before running so my system has time to settle before I start. Don't want to have any unexpected intestinal issues 😃 So basically, I had no idea how to prepare for running this one. I decided to eat my normal breakfast and lunch, and have a snack mid afternoon. Dinner would wait until I finished. I figured I would finish around 8:30pm and then would be back to the room by 9:00pm. A late dinner for sure and not ideal; but best under the circumstances.

Before heading to the start line, I met up with two other Spark Buddies... LDYHZE (Elisa) and LIFEFOUNDONARUN (Brenda). I had just met Brenda the day before for the first time. 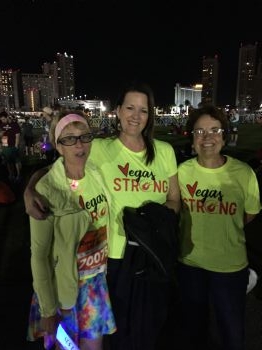 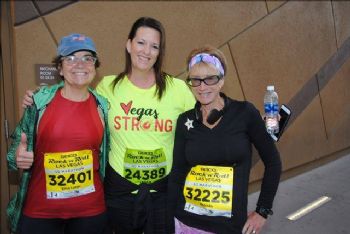 Brenda is a faster runner than Elisa and myself, so once we arrived at the Start Village she left to make her way to the Green Corrals. My plan was to run with Elisa and not worry about my time. I just wanted to enjoy the experience. Elisa has recently switched to running intervals (run / walk intervals as I do) so I planned to let her set the pace. We milled around until the blue corrals were called to line up and then made our way to our corral. We visited with some other participants and then made our way up the starting chute. I was a bit nervous that there wouldn't be enough light to see the road, but as it turned out for the most part didn't have a problem. 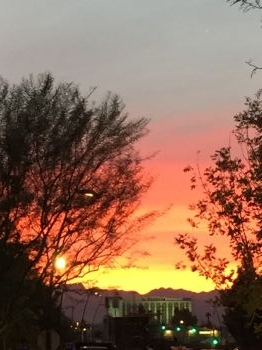 The start line was on the strip adjacent to New York New York. 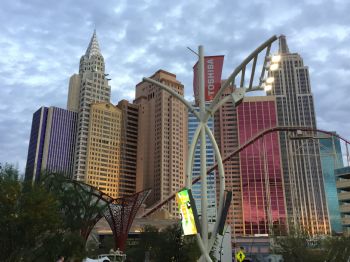 The course started by heading South on the Strip and then turning with an out and back by the airport before we headed North on the Strip. It was sobering running past the Mandalay Bay Hotel after the horrific tragedy just a couple of months ago. I kept finding myself looking up at the hotel towers. When you are in a crowd you really are a sitting duck for deranged shooters. The security for the event was noticeable and I believe everything possible was done to keep us safe. There was a police presence at every intersection that was blocked off. I was very proud to be with Elisa as she made it a point to thank the officers and other volunteers as she passed. She told me that thanking others helped her remain positive and kept her energy and spirits up. She likes to hoot and holler and all her energy kept mine up too! One of the highlights of this part of the course was running by the iconic "Welcome to Las Vegas" sign. 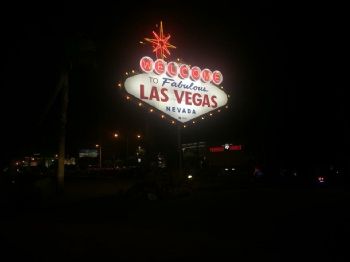 The course itself is fairly level and on pavement the whole way. The shoes I selected to wear were not the best choice as I knew they were at the end of their lifespan. By the time I finished, my hip was bothering me and hip pain for me is always a sign that my shoes need to be retired. The shoes still look perfectly fine, but they aren't fine and they are now on the way to recycling. Running the Strip is a fun experience and the miles clicked by quickly. 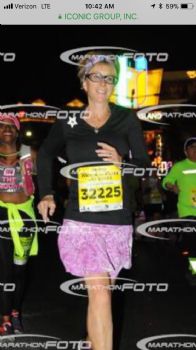 There were tons of spectators cheering us on and I could tell many of them had been drinking... so that was a bit different too. As we made our way down the Strip to Fremont Street and beyond I enjoyed the lights and energy. Fremont Street was lit up and that was the highlight before we made our way back South ending by Caesars Palace. 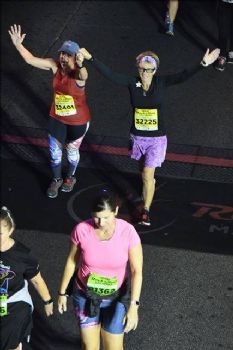 The finishers chute was quite lengthy and the husbands had made prior arrangements to meet us at the Bellagio Fountain rather than try and find us in the crowd at the finish. I picked up my finishers medal and also received the Remix medal for doing the 5k (with DH) the evening before. 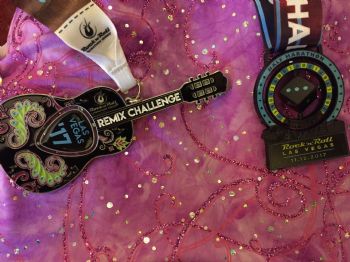 Since this was my 4th Rock n Roll event for 2017, I will also be getting an additional "Heavy Metal" in the mail. The heavy metals are a special medal given if you do more than one RnR event in a calendar year.

All in all, I'm glad I did the Vegas event and I can now cross that off the bucket list. Many people run the event every year; but I don't feel compelled to do it again. There are so many events out there and each one is a different and unique experience. Next year, I look forward to finding another special event to run as we drive from Arizona back to Oregon. Maybe something in San Diego? 😃 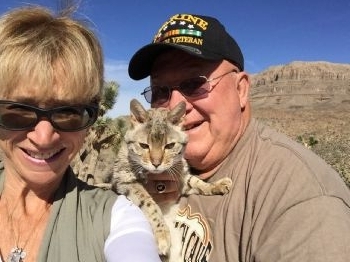