Change is neccesary and inevetable

Hi, it has been ages since I last came here to blog. I'm feeling a little apprehensive as I really want - no, NEED - success this time around and I don't want to jinx it.

Since I lost 160lbs many moons ago, I've gained back all and then some. Over the past few years, I was ill and gained a lot more. Which by June 2019 made me tip the scale at a hefty 202,4kg! That is 445,28lbs. I've been through a lot of bad experiences with my health this past two years and by July after the 5th time under anesthesia within 6months, my body said, no more! My oxygen levels fell to less that 40% three times during the procedure. That is life threatening. They eventually aborted the procedure and when I woke up the dr told me that before he operates on me again, I will have to lose at least 60kg. (132lb) Not only that but he told me that I had to get bariatric surgery in order to lose the weight.

I couldn't understand his reasoning. Why would he urge me to get a surgery that is far more risky and takes far more time than the one he just tried to perform? It sounded counter intuitive. So I decided to make my own way just as I did before. Only this time I was too heavy and had too little breath to do any exercises and it was 100% down to my eating in order to lose the weight.

It took me all this time, but I'm now down 24,9kg as of this morning. I'm a little proud of myself and a little upset too. I lost well in the beginning and between November and January gained almost 8kg, which I had to lose once again the past month.

In any case I hope to make it to 70kg lost by November of this year. I just need to stay focused.

Oh, and if you got this far. I have been diagnosed with Idopathic subglottic stenosis. Which are just fancy words that say my Airway is closing up with scar tissue just underneath my vocal chords and they do not know what causes it.
I have a 3mm airway at the moment which is way to small to breathe through if your airway is usually between 15 and 20mm open. Because my ops didn't work out as it should - the scar tissue grew back within weeks after removal, I received a Tracheostomy and now breathe through a tube in my neck. Still don't have a lot of air coming through, but it is better than not having it. While ugly and giving me a lot of its own problems, it keeps me breathing and alive. I am thankful for that. 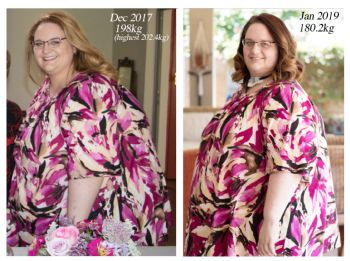