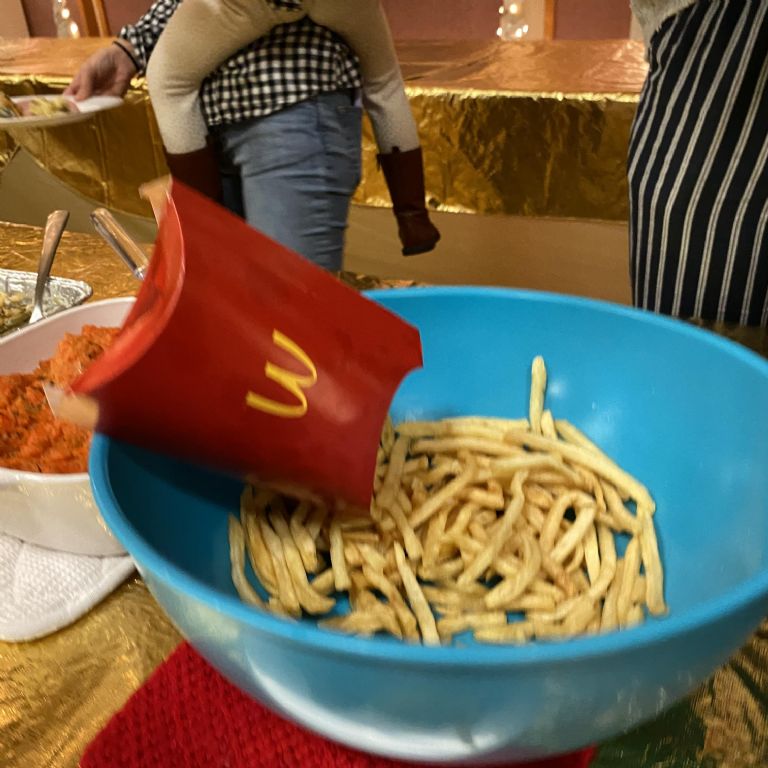 This fella would have been lynched in my household. 😂 My grams would have chased him with a cleaver. Casual Holiday Legend Asked to Bring Potato Dish Rolls Up With McDonald’s Fries MELISSA LOCKER  December 16, 2019 This holiday season, you might consider giving family members what they really want—French fries. Over on Reddit, a user shared a heartwarming moment from a family potluck where a cousin brought an unexpected side dish. The user’s cousin is apparently a culinary genius, because when asked to bring a “potato dish” to a family party, they didn’t show up with scalloped potatoes, potatoes au or Master Chef Joel Robuchon’s signature mashed potatoes. Instead, they brought McDonald’s French fries. It is a canny, if unusual choice, because French fries are made of potatoes and everyone likes them, so while people may laugh, who would complain? Plus, due to a poor potato harvest, there’s the distinct possibility of an impending French fry shortage, so this helpful soul is ensuring their family got one last taste of fries this year. In the end, even if McDonald’s French fries aren’t traditional potluck fare, maybe they should be. While there is no doubt that this cousin is now a holiday legend, there’s always the possibility that they were working on a more nefarious scheme. After all, a study has linked eating fried potatoes at least twice a week with an increased risk of death. So depending on how they feel about their family during the holidays, this is either an ingenious potluck move or a sneaky form of low-key aggression. Either way, it’s very clever. https://www.reddit.co
m/r/funny/comments/eb3zga/
my_cousin_was_asked_to_bri
ng_a_potato_dish_to_the?ut
m_content=title&utm_medium
=post_embed&utm_name=54968
64183fb4a6c9062b208fcf63ed
1&utm_source=embedly&utm_term=eb3zga My cousin was asked to bring a potato dish to the family party...
Share This Post With Others
Report Inappropriate Blog
Member Comments About This Blog Post