Got hit with the worst migraine I've had in at least six months yesterday. Maybe longer. Odd that it should come right after I just went to the nuerologist and got a new game plan for treating them. I almost skipped that appointment because things have been good lately. But when things are bad, they're bad. The weather was great yesterday - would have been a great day to hit the trail, not dealing with a migraine. It's still here a bit today, but not near as bad. I have my stuff packed to go and as long as it stays at this level, I should be able to hit the trail.

The healthier chicken and rice soup I made yesterday was just ok. Everyone ate it. It wasn't a disaster. But I don't think I'll make it again. Subbing milk for cream just made it feel like you were eating a bowl of milk for dinner. But no one complained. 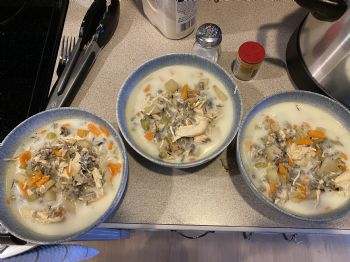 I checked in on my weight yesterday and don't think I'll make my September goal. I was ready to write September off. Then I realized how much of September is left. We're just over halfway! Plenty of time left. I also weighed 2 lbs less at the doctor's off the other day - guess my scale weighs heavy.